On January 20th, 2021, Former Vice President and U.S. Senator Joseph R. Biden Jr. was sworn in as the 46th President of the United States of America. Having campaigned on a strong environmental platform that championed a national transition towards renewable energy, an American commitment to reducing greenhouse gas emissions, and a federal strategy focused on confronting climate change, many are curious how much Biden can accomplish in office.

Following his inauguration, the new White House website listed “Climate” as one of the president’s immediate priorities: “President Biden will take swift action to tackle the climate emergency. The Biden Administration will ensure we meet the demands of science, while empowering American workers and businesses to lead a clean energy revolution.”

The President campaigned on using the Green New Deal as a “crucial framework” for federal climate action, achieving net-zero economy-wide greenhouse gas emissions by 2050 (with the energy sector achieving net-zero emissions by 2035), and investing heavily in new clean energy infrastructure. While he is sure to face roadblocks from a divided Senate and a razor-thin majority in the House, some of his policy ambitions will come to fruition.

As one of his first acts as commander-in-chief, Biden signed an executive order mandating that all new leases for energy projects on public lands be blocked, and that existing energy projects on public lands face review. While the details of the specifics remain murky, clarification from the Department of the Interior is expected in the near future.

The Corporation Commission is setting gradual benchmarks for state utilities from now through 2050. Here is a quick graphic describing the benchmarks being set, which are part of a longer piece I wrote that goes in depth regarding these new rules. 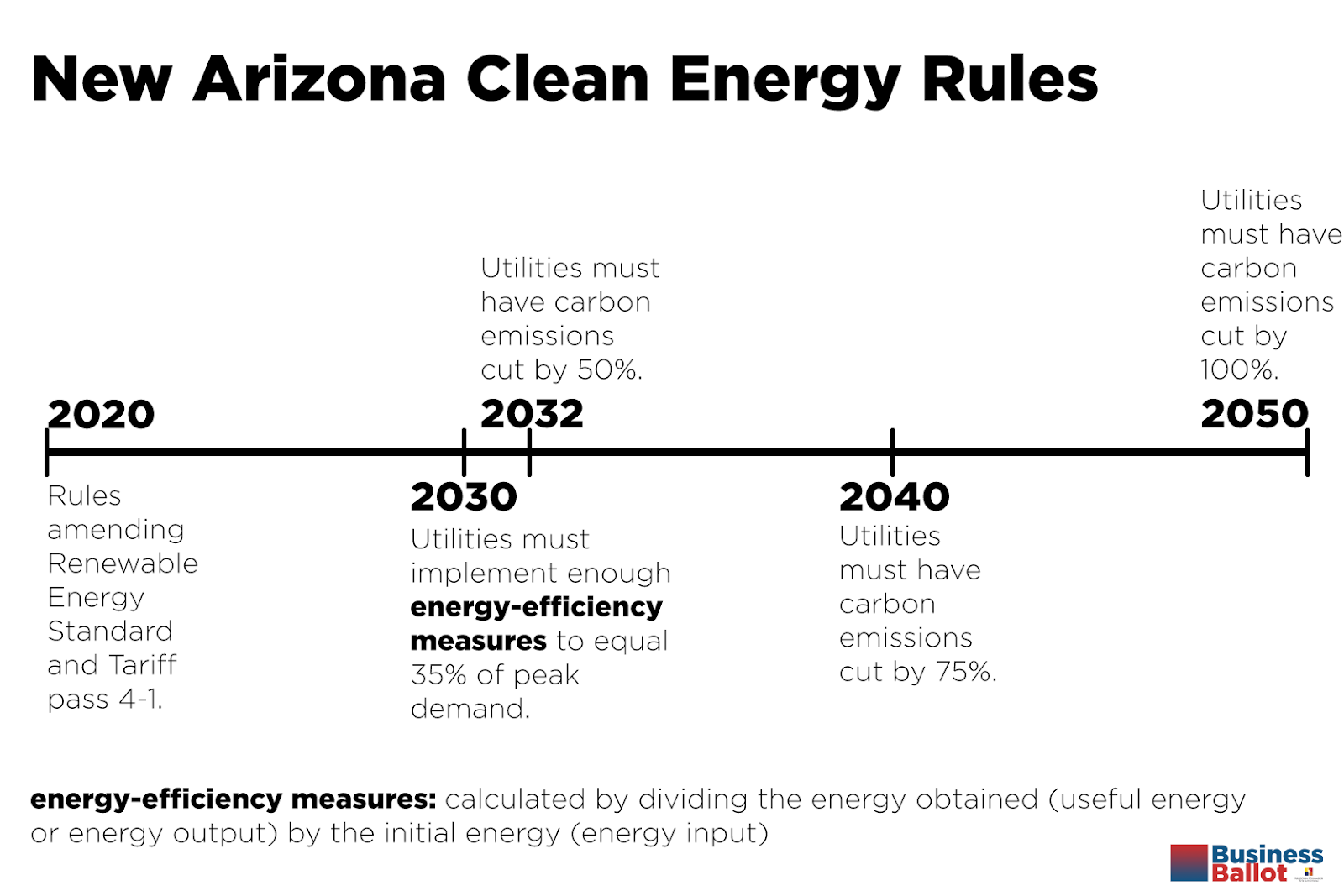 Crucially, Arizona’s plan includes nuclear power as a carbon-free source of energy, which is particularly important because more than half of all power generated in the state originates from Palo Verde Nuclear Generating Station. The plant provides carbon free energy for up to 4 million people annually.

The Biden Administration is expected to leverage its power to push other states without such mandates towards them. But progressive activists lobbying the 46th President are aiming to eliminate nuclear power and natural gas from the strategy, which would make the 2050 goal, not to mention the 2035 goal, much more difficult to attain.

He has some specific benchmarks for this investment as well:

While the direct avenues of investment remain hazy, they would include direct fiscal stimulus — spending, tax incentives, and “green bonds” — as well as partnerships with industry that promote “upskilling” workers and modernizing the American economy.

Interestingly, this agenda is broadly domestic in focus. While the Biden Administration mentions international engagement, it focuses primarily on policy changes the United States can make within its own borders. Despite the vast differences between Biden and his predecessor, the last Administration’s emphasis on American jobs and prosperity has carried over to the White House’s new inhabitants as well.

Arizona’s expanding economic outlook, which is fueled by a growing population and a booming jobs market, would benefit greatly from such investments in good-paying careers, but such investments may come at the expense of higher taxes on working- and middle-class Arizonans and unsustainable deficit spending

Biden has pledged to spend $300 billion on research and development, specifically on electric vehicle technology, artificial intelligence, and materials used to construct more 5G tech. The president’s focus on promoting “Made in America” products and bringing supply chains and jobs to the United States serves as the foundation for these planned investments.

Arizona has seen a surge in business growth in recent years, including significant expansion of its advanced manufacturing and tech sectors. In fact, metro Phoenix’s industrial market just posted “its largest amount of net absorption in history during 2020.” Such public investments from the federal government would likely benefit Arizona through upscaling infrastructure, expanding these burgeoning industries, and promoting innovation within the state.

Nuclear power is notoriously capital intensive, with each generating station taking years to construct and billions of dollars in investment. That’s why federal policy regarding the issuance of nuclear power permits, regulation on power generation, and defining “clean energy” in climate plans as inclusive to nuclear power is vital to its sustained operation and possible expansion.

Biden has signalled willingness to continue Trump’s broadly pro-nuclear federal approach. In fact, Biden’s climate strategy “has included proposals for a new generation of nuclear reactors in his clean energy platform, parting ways with ‘no-nuke’ progressives further to his left.”

Biden’s Administration has struck a remarkably positive tone on climate policy, but he also campaigned on expanding regulations and federal mandates to clamp down on greenhouse gas emissions.

On his first day in office, Biden halted the Keystone XL Pipeline project that had been on hold under President Obama and restarted under President Trump. Canadian Prime Minister Justin Trudeau criticized the move, claiming that the project would create jobs, enhance the American-Canadian relationship, ease a transition towards a carbon-neutral economy, and provide a safer and more efficient means to transport energy across Canada and the United States.

Biden also plans to expand federal regulation on environmental matters, leveraging the Environmental Protection Agency. He also has expressed interest in placing a tax on carbon, which business groups have become more friendly towards over the past four years. Biden aims to strengthen fuel emissions standards, likely accelerating the United States’ adoption of electric automobiles.

Arizona is home to several alternative fuel vehicle manufacturers such as Nikola Motor and Lucid Motors, meaning that an expansion of the electric auto sector would likely benefit these operations.

Should Congress come to an agreement with the White House on carbon pricing, prices on many items are projected to increase. The nonpartisan Tax Policy Center estimates that a hypothetical “tax of $40 per ton would add about 36 cents to the price of a gallon of gasoline, for example, or about 2 cents to the average price of a kilowatt-hour of electricity.” This could raise utility rates for Arizona ratepayers and prices on certain goods.

There are many derivations of proposed federal carbon tax policies, however, and some Republicans have endorsed the concept of carbon dividends. Such a policy would distribute funds lost from carbon pricing directly to American families, hypothetically ensuring that “[a]bout two-thirds of Americans will receive more in Dividends than they will pay in higher prices.”

Regardless of Biden’s success in passing such policies, regulations are sure to tighten federally. Their impact on Arizona’s economy and quality of life are up for debate, and lawmakers, policy minds, and leaders in the private sector are preparing for an expansion of the federal regulatory approach.

As Arizona lawmakers convene for their annual session, two bills aim to curtail the powers of the Corporation Commission.

HB 2248 and SB 1175, sponsored by House and Senate Republicans who hold the majority in both houses, would prohibit the Corporation Commission from regulating critical electric generation sources. These are defined as “any resource used or acquired by a public service corporation, including solar, wind, biomass, geothermal, nuclear, hydroelectric, fuel-cell technology, natural gas or coal or any other petroleum fuel source.”

The passage of such bills would complicate the Biden Administration’s approach to achieving energy sector carbon neutrality.