The Arizona Junior Fellows, a project of the Arizona Chamber Foundation, has partnered with the School of Civic and Economic Thought and Leadership at Arizona State University to host a panel of distinguished guests to discuss Arizona’s initiative process.

The event, “Is Arizona’s Initiative Process Ripe For Reform?”, features state and national leaders who will discuss the history and purpose of Arizona’s citizen initiative process, how the process has been used since its inception and whether the current process is utilized more by organized interests rather than Arizona residents.

The panelists will also examine the inherent conflicts between direct and representative democracy, the use of direct democracy across the country, and trends in policymaking at the ballot box followed by a Q&A with attendees.

The panel will feature:

The paper that sparked the conversation

In December 2020, the Arizona Junior Fellows published a white paper titled “From Idea to Law: Arizona’s Initiative Process,” which provided a historical overview of the state’s unique initiative process as well as its benefits and deficiencies. After the passage of recent ballot propositions to legalize marijuana and increase income taxes on small businesses, the topic of initiative reform had become a relevant issue, with multiple bills on the subject being proposed at the Arizona Legislature.

The event is the first of a series entitled The Future of Arizona Democracy Project.

You can find out more about this new project here.

The event is at 5:00 pm on Monday, April 12th via Zoom. To RSVP, visit the registration page here. 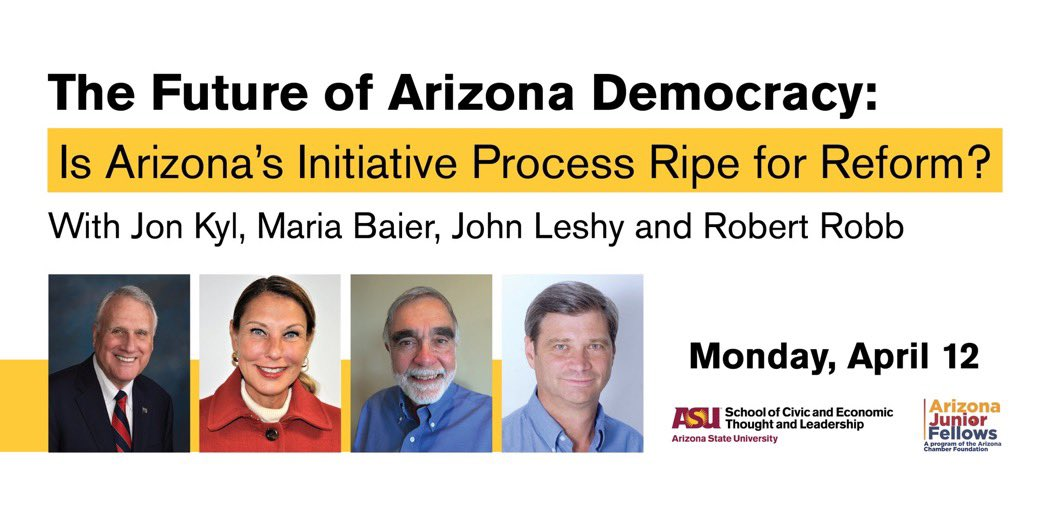