The National Assessment of Educational Progress (NAEP) released 2019 12th grade Math and Reading national results a few days before the 2020 election. NAEP provides state level data for 4th and 8th graders at the state level, but this recent data was only at the national level. The news is bad; performance of American 12th-graders was in decline before the pandemic struck. These tests were given in the spring of 2019, meaning before the COVID-19 pandemic. 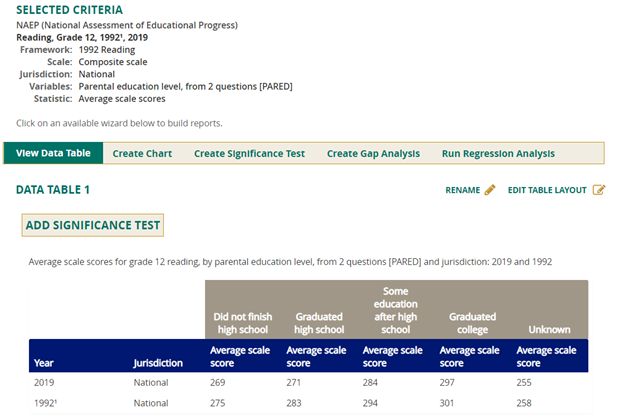 Regardless of the level of education of your parents, reading scores were lower for the Class of 2019 than 1992 despite the higher level of spending. All of the above declines in scores are statistically significant. An increase in childhood poverty might explain such a decline, but Mike Petrilli from the Fordham Institute provided the below chart showing that national childhood poverty rates have declined from where they stood in the early 1990s. 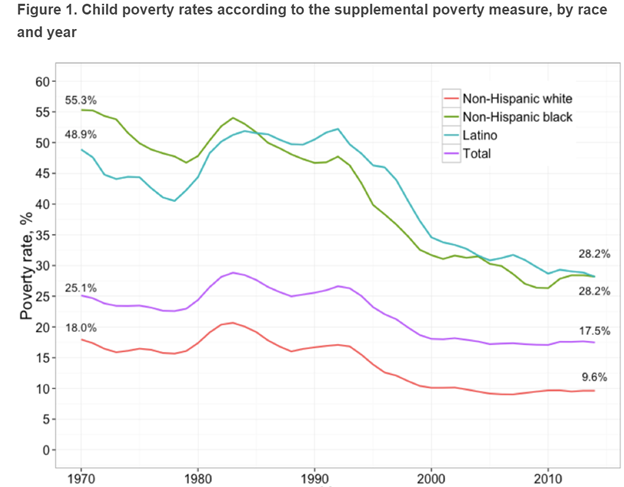 We do not have 12th grade NAEP data for Arizona, but we do have reasons to hope that Arizona’s results have been better than that of the nation as a whole given the improvement in 4th and 8th grade scores seen in Arizona’s NAEP results: 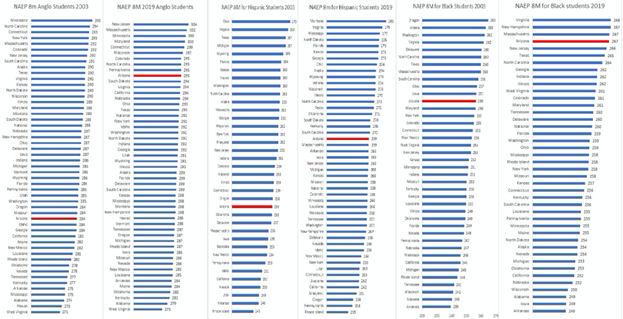 The above chart shows NAEP 8th grade math scores from 2003 (the first year all 50 states participated) and 2019 (the most recent available) for Anglo, Hispanic and Black students. All three student groups advanced approximately a grade level worth of learning, with both Arizona’s Anglo and Black students landing in the top 10 when compared to their peers in other states in 2019.

Arizona educators nevertheless have their work cut out for them in attempting to help students recover from COVID-19 related learning loss. Evidence regarding “COVID slide” has begun to trickle in from formative assessments given during the Fall of 2020, and the data is concerning. For example, 54% of Dallas Independent School District 5th graders reached the “meets grade level” threshold in math in 2019, but only 24% of this year’s 5th-graders do so on the same test given in 2020.

The national 12th grade NAEP results are especially worrisome as students took the exams approximately a year before the outbreak of COVID-19. The next round of state level NAEP is scheduled for the Spring of 2021 and seems likely to show academic damage caused by the closure of schools and the reduction of instruction time.

The term ‘chronic absenteeism’ is defined as missing 10% or more of school days in a year. By that standard, the majority of K-12 students might be considered chronically absent this school year.

Alderman examined the instruction time being delivered by 10 major American districts, including Arizona neighbors Los Angeles Unified and Clark County Nevada (Las Vegas metro area). He found that these and other districts were delivering less than half of the normal amount of instruction. 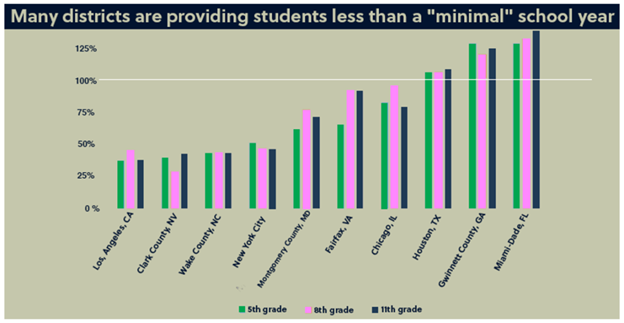 The long and the short of this: the 2019 NAEP demonstrated that American education had substantial problems before the COVID-19 pandemic. Despite the heroic efforts of many educators to hold things together during an incredibly challenging period, the scale of the challenge has grown still more dire. Arizona schools however rose to the challenge of the Great Recession by leading the nation in academic gains. I’m “all in” on them rising to this new challenge as well.